What did gold, frankincense, and myrrh represent?

What did gold, frankincense, and myrrh have to do with gifts to Christ? What do the gifts represent?

Gold, frankincense, and myrrh were the gifts that were given to Jesus by the wise men according to Matthew 2:11.

And they came into the house and saw the Child with Mary His mother; and they fell down and worshiped Him; and opening their treasures they presented to Him gifts of gold and frankincense and myrrh. Matthew 2:11 (NASB)

The gift of gold was considered worthy of a king. The buildings and treasures of kings and pharaohs from the ancient past have left reminders that gold was the prize of rulers and kings. Both secular and biblical kings greatly valued gold. The following two passages reveal that King Solomon acquired valued gold and King Nebuchadnezzar made a gold idol or image of himself.

All King Solomon’s drinking vessels were of gold, and all the vessels of the house of the forest of Lebanon were of pure gold; silver was not considered valuable in the days of Solomon. 2 Chronicles 9:20 (NASB)

Nebuchadnezzar the king made an image of gold, the height of which was sixty cubits and its width six cubits; he set it up on the plain of Dura in the province of Babylon. Daniel 3:1 (NASB)

While gold can be a gift for anyone, gold was a gift especially worthy for kings. 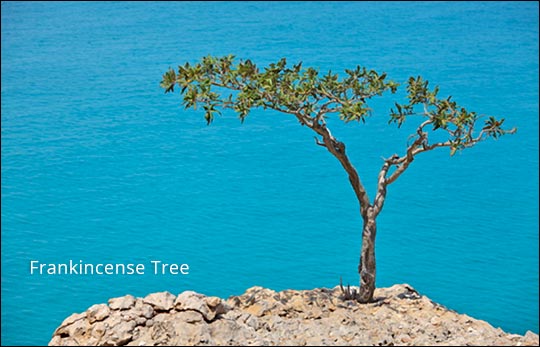 Frankincense comes from tree resins. Frankincense was once greatly valued throughout the Middle East from Rome to India. It was very expensive and has a wonderful fragrance. Frankincense occurs fifteen times in the Bible. A quick survey reveals it was used primarily in biblical times for making incense (Exodus 30:34) and as an ingredient in sacrifices (Leviticus 2:1-2). Song of Solomon 3:6; 4:14 reveals it was also an ingredient in perfume. Since frankincense was primarily used in the Bible in worship, frankincense speaks of the worship of God..

Then the LORD said to Moses, “Take for yourself spices, stacte and onycha and galbanum, spices with pure frankincense; there shall be an equal part of each. Exodus 30:34 (NASB) 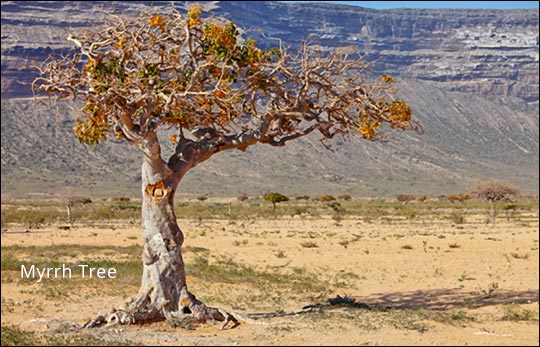 Myrrh is extruded from the gum of the Commiphora myrrh plant. Myrrh was less expensive than frankincense, but was still highly valued. Myrrh is referred to seventeen times in the Bible and is first mentioned in Genesis 37:25, where it was being carried by camels in a caravan. Myrrh was used for a variety of purposes in biblical times as a perfume (Song of Solomon 1:13; 3:6; 4:6, 14; 5:1, 5, 13), an anesthetic, for burial embalming (John 19:39), as an ingredient in anointing oil (Exodus 30:23-25), and to deodorize clothes. According to Esther 2:12, it was also used in a cosmetic for women. John 19:39 records that myrrh was used in Jesus’ burial.

Nicodemus, who had first come to Him by night, also came, bringing a mixture of myrrh and aloes, about a hundred pounds weight. John 19:39 (NASB)

In the New Testament, myrrh is primarily associated with death.

Since gold, frankincense and myrrh were highly prized by kings and emperors, these magi gave Jesus three very expensive gifts. The gift of gold was a king’s gift and Christ is our King. Frankincense was a worthy gift for Christ since He was the anointed One who deserves our worship. Myrrh was a prophetic gift because Jesus would die for the sins of the world.

Gold speaks of His birth. He is born a King. Frankincense speaks of the fragrance of His life. Myrrh speaks of His death. All of this is indicated in the gifts that were brought to Him at His first coming.[1]

Christmas Story - Biblical Accounts
Gabriel Visits Mary
Mary’s Magnificat
Joseph’s Dream
Jesus Is Born In Bethlehem
Arrival of the Magi To Visit Christ
Where was Jesus when the wise men found Him and gave Him gifts?
Is there secular evidence Herod killed babies under the age of two?
What does Immanuel mean?
Is Isaiah 7:14-16 a prophecy about Jesus Christ?