What are the seven churches in Asia and seven spirits in Revelation 1:4?

What are the seven churches in Asia and seven spirits before the throne in Revelation 1:4?

In Revelation 1:4 the apostle John greets the seven churches in Asia and in the process mentions the seven Spirits who are before the throne of God.

John to the seven churches that are in Asia: Grace to you and peace, from Him who is and who was and who is to come; and from the seven Spirits who are before His throne . . . Revelation 1:4 (NASB)

The seven churches were located in Asia Minor or the country that is now called Turkey. 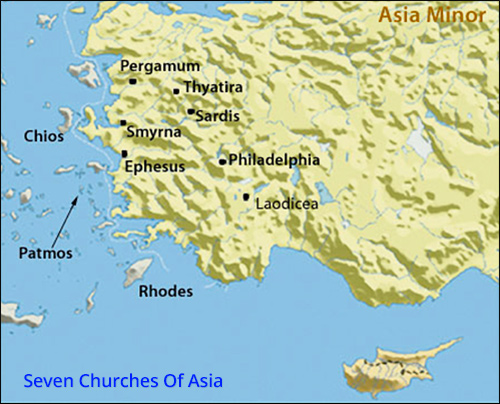 Some believe the churches represent different phrases of the spiritual condition of the church down through history. But there is no reason to believe that the churches are symbolic of different phases of church history since the churches were actual churches that existed in Asia. It is important to note that most of the books of the New Testament were originally letters sent to various churches: Ephesians was written to the Christians at Ephesus, Corinthians to Corinth, Romans to Rome and Colossians to Colassae. Similarly, Revelation 1-3 follows the same pattern and chapters 2 and 3 are short letters sent to various churches. The apostle John has simply named the churches to which the messages of the Holy Spirit were sent.

The seven spirits refer to the Holy Spirit in the fullness of His ministry both to us and to Christ. The number seven is frequently used in scripture to speak of perfection. So here in Revelation we will see the Holy Spirit in all of His fullness and power.

To the angel of the church in Sardis write: He who has the seven Spirits of God and the seven stars, says this: “I know your deeds, that you have a name that you are alive, but you are dead.” Revelation 3:1 (NASB)

And around the throne were twenty-four thrones; and upon the thrones I saw twenty-four elders sitting, clothed in white garments, and golden crowns on their heads. And from the throne proceeded flashes of lightning and sounds and peals of thunder. And there were seven lamps of fire burning before the throne, which are the seven Spirits of God; and before the throne there was, as it were, a sea of glass like crystal; and in the center and around the throne, four living creatures full of eyes in front and behind. Revelation 4:4-6 (NASB)

And I saw between the throne (with the four living creatures) and the elders a Lamb standing, as if slain, having seven horns and seven eyes, which are the seven Spirits of God, sent out into all the earth. Revelation 4:6 (NASB)

The seven churches were literal churches to which Revelation was sent. The phrase “seven Spirits” is a wonderful way of referring to the Holy Spirit in all of His power and wonder.

Book of Revelation
Glimpses of God