Was baptism required for salvation after Jesus’ resurrection? — Baptismal Regeneration 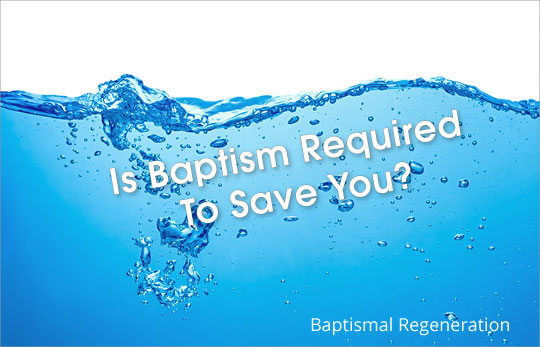 Requirements For Salvation Have Never Changed

We will start with Genesis 15:6 where we are told that Abraham believed in God. As a result he was credited with the righteousness of God.

And He took him outside and said, “Now look toward the heavens, and count the stars, if you are able to count them.” And He said to him, “So shall your descendants be.” Then he believed in the LORD; and He reckoned it to him as righteousness. Genesis 15:5-6 (NASB)

Notice that we are told Abraham was reckoned with righteousness. The Hebrew word for reckoned is hasab. It means “to credit, account, or impute.” That is, Abraham did not earn this righteousness; yet God imputed righteousness to him. He was given righteousness as if it were his own. Later in Romans 3:22-24 the apostle Paul writes by the Holy Spirit that the righteousness of God was given to Abraham through faith in Jesus Christ.

. . . the righteousness of God through faith in Jesus Christ for all who believe. For there is no distinction: for all have sinned and fall short of the glory of God, and are justified by his grace as a gift, through the redemption that is in Christ Jesus . . . Romans 3:21-24  (ESV)

He made Him who knew no sin to be sin on our behalf, so that we might become the righteousness of God in Him. 2 Corinthians 5:21 (NASB)

When a person is made righteous, God no longer considers them to be a sinner. Christ took away our sin and we obtained His righteousness as a gift (1 Peter 2:24; 3:18). That is, God no longer sees our sins because of Christ. In reality our behavior is not always righteous; but God counts, imputes, reckons or considers us to be righteous even when we are not. He no longer sees a Christian as a sinner who is going to hell. That is the message of Romans 5:1-2. It is important to notice that often Christians are called “saints” (Romans 1:7; 1 Corinthians 1:2; 2 Corinthians 1:1; Ephesians 1:1; Philippians 1:1; Colossians 1:1; 2 Thessalonians 1:10; Philemon 5; Hebrews 13:24; Jude 3; Revelation 5:8). Have you ever wondered about the meaning of the Greek word that is translated as “saints”? The Greek word is hagios, and it literally means “holy ones.” That is, Christians are considered holy, like God is holy. This refers to our position before God. Yet, we still sin. In theology this concept is referred to as our position versus our practice. We encourage you to visit the study “Position & Practice – Discipleship Series” for more information.

Now lets return to the book of Romans and read Romans 4:3-5,

For what does the Scripture say? “ABRAHAM BELIEVED GOD, AND IT WAS CREDITED TO HIM AS RIGHTEOUSNESS.” Now to the one who works, his wage is not credited as a favor, but as what is due. But to the one who does not work, but believes in Him who justifies the ungodly, his faith is credited as righteousness . . . Romans 4:3-5 (NASB)

In this passage we are reminded that Abraham’s righteousness was credited to him. He did not earn it. The Greek word for “credited” is logizomai. The word means,

The last part of this passage is important because we are reminded that Abraham was circumcised after he believed in God. That is, he did nothing in addition to believing in God in order to be given the righteousness of God.

Next, in verses 21-25 we are told that Christians are given the righteousness of God, just like Abraham, in response to our belief that Jesus died and was resurrected for the forgiveness of our sins.  After Christ’s resurrection, salvation is still by faith and nothing else.  The requirements for salvation did not change. The apostle Paul is using Abraham as an important example that salvation is by grace alone through faith alone in Christ alone.

To be “imputed” with the righteousness of God means that God no longer considers us to be sinners. When a person is given the righteousness of God, they become a Christian. That is the message of Romans 5:1-2. Notice that we are justified by faith. The word justified is a legal term that means God judicially declares those who believe in Christ to be righteous. In the Greek the words justified and righteousness come from the same Greek stem. They are related to one another.

Therefore, having been justified by faith, we have peace with God through our Lord Jesus Christ, through whom also we have obtained our introduction by faith into this grace in which we stand; and we exult in hope of the glory of God. Romans 5:1-2 (NASB)

Notice that Ephesians 2:8-10 teaches us that we are saved by faith and nothing else. Works are not involved. Some want us to believe that baptism is not a work. But the Greek word translated as “works” is ergon. It refers to any action or energy expended. Since baptism involves action it is ergon.

For by grace you have been saved through faith; and that not of yourselves, it is the gift of God; not as a result of works, so that no one may boast. For we are His workmanship, created in Christ Jesus for good works, which God prepared beforehand so that we would walk in them. Ephesians 2:8-10 (NASB)

Salvation does not involve baptism.

In summary, the requirements for salvation are the same in the New Testament as they were in the Old Testament. Salvation has always been by faith plus nothing else. Notice that Romans 3:25 teaches that God “passed over” or in a sense “winked”at the sins of the Old Testament saints until Christ died and was resurrected. That is, their sins were forgiven pending the death and resurrection of Christ.

Warning About A Different Gospel

I am amazed that you are so quickly deserting Him who called you by the grace of Christ, for a different gospel; which is really not another; only there are some who are disturbing you and want to distort the gospel of Christ. But even if we, or an angel from heaven, should preach to you a gospel contrary to what we have preached to you, he is to be accursed! As we have said before, so I say again now, if any man is preaching to you a gospel contrary to what you received, he is to be accursed! Galatians 1:6-9 (NASB)

Those who teach salvation by faith and baptism are preaching a different gospel. The apostle Paul says they are accursed. We need to run from them even if they seem to be an angel from heaven.

There are four key passages in the New Testament that cults and false teachers have used in an attempt to cause people to believe that baptism is required in order to be saved. They use Mark 16:15-16 which is a passage of Scripture that should not be used to establish any doctrine since the passage most likely does not belong in the Bible (see Should verses 9-20 be included at the end of Mark 16?). An important principle in biblical interpretation is to avoid establishing a doctrine by using a passage that is highly questionable.

The second passage that some claim show baptism is required for salvation is Acts 2:38. But such a claim violates the hermeneutical principle that states Scripture does not contradict Scripture. We must remember that Scripture cannot contradict Scripture because God does not lie (Titus 1:2) and He wrote the Scriptures. The New Testament overwhelmingly states that salvation is by faith and not by works. The example of Abraham (see above) is an illustration. Ephesians 2:8-10 explicitly states that salvation is not by works, but only by faith. Other passages that teach salvation is by faith and nothing else are John 1:12; 3;16; Acts 16:31; Romans 3:20-30; 4:2; 9:11, 16; 10:9-10; 11:6; 1 Corinthians 1:29-31; Galatians 2:16; Ephesians 2:8-10; Philippians 3:9; 2 Timothy 1:9; and Titus 3:3-5. Are we to believe that this one verse nullifies all of these verses? Finally, other passages in Acts do not teach that salvation requires baptism (Acts 3:19; 5:31; 26:20). Those who argue that baptism occurred in every situation but Scripture just does not record it, face an insurmountable hurdle to prove their point. Such an argument from silence violates good hermeneutics.

The phrase wash your sins must be connected with calling on His name since connecting it with be baptized leaves the participle epikalesamenos (calling) without an antecedent.[2]

It should also be noted that there are no commas in the Greek text of this verse. Therefore, the punctuation in our English Bibles is not authoritative.

The final passage that is sometimes used to teach baptismal regeneration is 1 Peter 3:20-21. But it is important to notice that when 1 Peter 3:20-21 refers to baptism, the apostle Peter quickly states that he is not referring to “the removal of dirt from the flesh.” He was not referring to water baptism, but to salvation through Jesus Christ. That is the plain sense meaning of the passage. For more information please visit The Victory Of Christ Over Everything.

Now notice that Acts 10:45 states that everyone was amazed that God had saved this Gentile. Cornelius was also speaking in tongues. Then Peter stated that Cornelius and others should be baptized since they had received the Holy Spirit.  Why? They were already Christians and baptism is an act of obedience that declares a new life has been committed to Christ. What have we discovered? Baptism was not required to save Cornelius and this occurred after Christ’s death and resurrection. For more information please read, “Was Cornelius saved during water baptism?” Baptism does not save anyone!

Baptism always refers to an identification with a person (Acts 19:5; Ephesians 2:8-9; Romans 6:3-4; 1 Corinthians 1:13, 15, 17; 10:2; Galatians 3:27; Colossians 2:12). Thus when someone is immersed into water in the name of Jesus Christ, they are saying that they have died to themselves and are raised to new life in Christ. Their new life is Christ. We need to understand that when Jesus commanded the disciples to make disciples and then baptize them in the name of the Trinity in Matthew 28:19-20, baptism was a declaration of submission to the Father, to Christ and to the Holy Spirit.

Go therefore and make disciples of all the nations, baptizing them in the name of the Father and the Son and the Holy Spirit, teaching them to observe all that I commanded you; and lo, I am with you always, even to the end of the age. Matthew 28:19-20  (NASB)

Notice that making disciples precedes baptism in this passage. Baptism is an identification into the Father, Son and Holy Spirit. Baptism is an act of obedience that demonstrates a person’s new allegiance or discipleship. An excellent example of this occurred in John 4:1-2 where it clearly refers to discipleship or to a person declaring allegiance to a teacher.

Therefore, we conclude that baptismal regeneration is “a different gospel; which is really not another; only there are some who are disturbing you and want to distort the gospel of Christ.” We need to flee those who teach such error. This error is an insult to Christ, since He did everything that is necessary for our salvation. Faith alone is required. The requirements for salvation have never changed!

Is Baptism Required For Salvation?
Is baptism (immersion) essential for salvation?
Should verses 9-20 be included at the end of Mark 16?
What is Lordship salvation? What does the Bible teach?
Is baptism symbolic?
Is salvation by grace through faith alone?
Do you believe that baptism is a part of salvation?
Must we be baptized to be saved?
Does one have to be baptized and filled with the Holy Ghost to be saved?
Was Cornelius saved during water baptism?