If God is omnipresent, how can Satan go in and out of God’s presence?

If God is omnipresent, how can Satan go in and out of God’s presence?

Our question is, “If God is omnipresent, how can Satan go in and out of God’s presence?” The answer is found in understanding God. In Isaiah 55:9-10 God reminds us that He is not like us. Yet, men and women try to understand God and statements in the Bible using human logic with limited information. That is the message of Psalm 50:21.

As a result, some people are condescending toward God and Christians often feel insecure and fail to understand the magnificence of God. Therefore, it is to our benefit to know God. Jeremiah 9:23 reveals God’s passion that we desire to know Him and passionately study the Bible in order to know Him.

Thus says the LORD, “Let not a wise man boast of his wisdom, and let not the mighty man boast of his might, let not a rich man boast of his riches; but let him who boasts boast of this, that he understands and knows Me, that I am the LORD who exercises lovingkindness, justice and righteousness on earth; for I delight in these things,” declares the LORD. Jeremiah 9:23-24 (NASB) 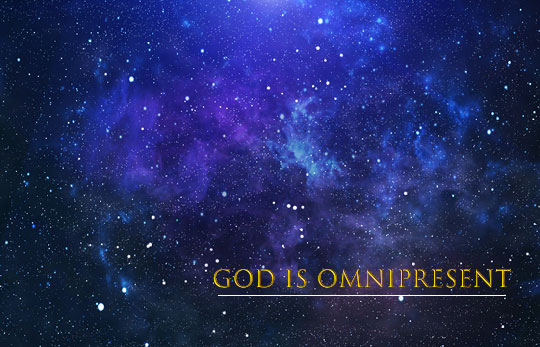 One of the attributes of God that should comfort and also cause fear is that He is omnipresent. Psalm 139:7-12 states that no matter where we go, we cannot escape Him.

Where can I go from Your Spirit?
Or where can I flee from Your presence?
If I ascend to heaven, You are there;
If I make my bed in Sheol, behold, You are there.
If I take the wings of the dawn,
If I dwell in the remotest part of the sea,
Even there Your hand will lead me,
And Your right hand will lay hold of me.
If I say, “Surely the darkness will overwhelm me,
And the light around me will be night,”
Even the darkness is not dark to You,
And the night is as bright as the day.
Darkness and light are alike to You. Psalm 139:7-12 (NASB)

The Hebrew word for “presence” is paneh. The word occurs 2,127 times in the Old Testament. It means “face” and is translated as face in Numbers 6:25, for example. It means: where can a person go to escape being before Him? Jonah discovered that truth when he tried to escape God by sailing to Tarshish (Jonah 1:2-2). God found him on a sailing ship on the Mediterranean Sea. Also, God knew that the apostle Paul was out on the Mediterranean Sea and sent an angel to speak to him (Acts 27:23-26). In both cases God knew that these men were out on the sea in a storm.

The prophet Jeremiah reminds us that God is near, just as Jonah  and Paul discovered.

Even though Jonah was a prophet, he did not understand God because he thought he could hide from God and escape his responsibility to preach at Nineveh. When we sin, we cannot hide our sin from Him for He sees everything that we do. King David and Bathsheba’s adulterous affair reveals that we cannot hide our sins. The king thought no one knew about his escapade, but he discovered God knew when the prophet Nathan confronted him (2 Samuel 12:1-12).

God Is Not Part of The Creation

Jeremiah 23:23-24 also teaches us that God is immense. This means He is not limited by His own creation. God is not part of His creation since He created the universe and everything in it. God did not make Himself. He is separate from the creation. Therefore, we say that God transcends the creation that He made. In 1 Kings 8:27 God the Holy Spirit reveals that the creation cannot contain our God.

But will God indeed dwell on the earth? Behold, heaven and the highest heaven cannot contain You, how much less this house which I have built!  1 Kings 8:27  (NASB)

Isaiah 66:1-2 is clearer by likening the earth to a footstool. Therefore, God is outside the creation and transcends both the invisible and visible creations.

Thus says the LORD,
“Heaven is My throne and the earth is My footstool.
Where then is a house you could build for Me?
And where is a place that I may rest?
For My hand made all these things,
Thus all these things came into being,” declares the LORD.
Isaiah 66:1-2a  (NASB)

An inadequate but helpful illustration is an aquarium and its owner. The owner of an aquarium selects perhaps a glass aquarium and places sand, filters, an air pump and a thermostatically controlled heater into it. Then he populates it with a variety of fish and calls it his aquarium.  Now the owner of the aquarium is not part of or in the aquarium; but everywhere those fish go in that aquarium, the aquarium owner is present. The inadequacy of the illustration is that the owner might leave the house!  But thinking about the illustration helps us understand that God is outside His creation; yet we are always in His presence.

God Meets His Creation at Specific Times and Places

Because God is omnipresent, He can meet His creation at any location. For example, God visited Adam and Eve in the Garden of Eden after they sinned (Genesis 3:8). In Exodus 33:7-11 we are told that God visited Moses at the “tent of meeting.”

How did our omnipresent God meet Moses at a tent? The answer is He decided to meet Moses at one place in His creation. In Exodus 33:11 we are told that God spoke with Moses face-to-face. Then in the following verses the discussion that Moses had with God is described and Moses is told that He cannot see God (Exodus 33:12-23). This means that Moses did not see God’s face, but they communicated as if they were face to face.

There are many examples of God visiting His creation personally in Scripture. God met Moses and his leaders on Mount Sinai (Exodus 24:9-10). Christ met Saul (later named Paul) on the Damascus Road in a beam of light (Acts 9:1-6).  John 14:23; 1 Corinthians 3:16-17; 6:9 and Ephesians 2:22 teach us that God the Holy Spirit has chosen to dwell within Christians.

In Revelation 4:1-4 we discover that God can be omnipresent and simultaneously sit on a throne in heaven. Now those who say this is impossible need to remember Psalm 50:21, where God reminds us that we think He is like us. The message of Scripture is that our omnipresent God can simultaneously visit someone in a given or specific location yet He remains omnipresent. 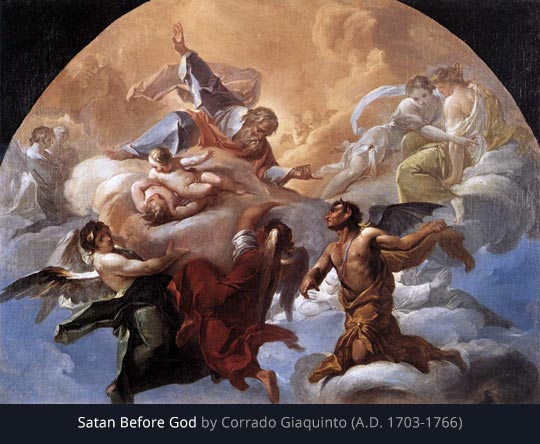 Job 1:6-7 helps us to better understand our God.

Now there was a day when the sons of God came to present themselves before the LORD, and Satan also came among them. The LORD said to Satan, “From where do you come?” Then Satan answered the LORD and said, “ From roaming about on the earth and walking around on it.” Job 1:6-7  (NASB)

The Hebrew word for “present” is yasab.  It occurs 48 times in the Old Testament and normally means “to stand” but in Job 1:6 the Hebrew verse tense gives the meaning of “presenting oneself.” It appears that this was a “planned” meeting with Satan and his demonic followers. Now we will answer the question, “If God is omnipresent, how can Satan go in and out of God’s presence?” The answer is our omnipresent God also meets His creation individually and where He wills. He is a personal God. He is not detached from His creation, but He is not part of the creation. His creation is like the aquarium. Figuratively speaking, He can visit us by tapping on the glass to capture our attention.

Psalm 138:6 and Proverbs 15:29 reveal that God will abandon the wicked and not visit them.

For though the LORD is exalted,
Yet He regards the lowly,
But the haughty He knows from afar.
Psalm 138:6 (NASB)

The LORD is far from the wicked,
But He hears the prayer of the righteous.
Proverbs 15:29

When God created the universe, He designed it to reveal Himself to us (Psalm 19:1; Romans 1:18-22) and Jeremiah 9:23-24 tells us that God wants us to know Him. He wants us to seek Him and know Him. It is wonderful to know that no matter where we go, we are never alone for our God is always with us (Matthew 28:19-20). We now understand why Jesus promised that He would never leave us nor forsake us. No matter where we go, we are in His presence. He sees us. Also, He dwells within Christians by His Holy Spirit and empowers us to grow spiritually and to flee sin. How does He do that? Scripture never explains the details.

The apostle Paul closes Romans 11 with this praise to our God.

Oh, the depth of the riches both of the wisdom and knowledge of God! How unsearchable are His judgments and unfathomable His ways! For WHO HAS KNOWN THE MIND OF THE LORD, OR WHO BECAME HIS COUNSELOR? Or WHO HAS FIRST GIVEN TO HIM THAT IT MIGHT BE PAID BACK TO HIM AGAIN? For from Him and through Him and to Him are all things. To Him be the glory forever. Amen. Romans 11:33-36 (NASB)

Is God a man or like a man?
Does God sin since He is jealous, gets angry and kills?
Is Jesus God in the O.T.?
What is the Trinity?
If God created the world, did Jesus ever create anything?
What does God know about us?
What are the names of God?
Is God impartial? He treats people differently.
Does the character of God reveal that He is all powerful?
How has God revealed Himself? – General and Specific Revelation