Does God sin since He is jealous, gets angry and kills?

Does God sin since He is jealous, gets angry and kills?

A question that is sometimes asked openly or is a concern is, “Does God sin? It is dangerous to come to the wrong conclusions about God. The foolish who claim that there is no God do not worry that they might come to a wrong conclusion about God. Psalm 14:1 and Psalm 53:1 both tell us that the foolish think that God does not exist. Psalm 10:4 explains one of the motivations for concluding that God does not exist..

In all his scheming,
the wicked arrogantly thinks:
“There is no accountability,
since God does not exist.”  Psalm 10:4 (NASB)

Therefore, we must be careful when we ask, “Does God sin?” If we conclude that God has sinned when He has not, we break the third commandment found in Exodus 20:7.  Verses can be found in the Bible that say God has been angry, wrathful, vengeful, jealous and has killed people. Here are a few examples. 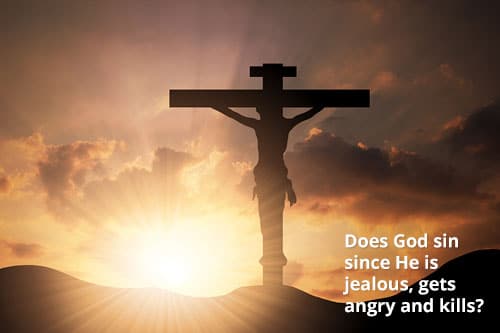 God’s Anger Is Motivated By A Desire For Holiness

In 1 Kings 11:9-10 we are told that God was angry with Solomon because he turned his heart away from God.

The LORD was angry with Solomon, because his heart had turned away from Yahweh, the God of Israel, who had appeared to him twice. He had commanded him about this, so that he would not follow other gods, but Solomon did not do what the LORD had commanded. 1 Kings 11:9-10 (NASB)

In sharp contrast to God, we are angry for selfish reasons. We are self-centered but God’s anger is motivated by a desire for holiness. Micah 7:18-19 gives us the purpose for God’s anger.

Who is a God like You,
removing iniquity and passing over rebellion
for the remnant of His inheritance?
He does not hold on to His anger forever,
because He delights in faithful love.
He will again have compassion on us;
He will vanquish our iniquities.
You will cast all our sins
into the depths of the sea.  Micah 7:18-19 (NASB)

His anger is against sin because He seeks holiness. When we repent, our God quickly forgives us. He does not keep a list of wrongs and casts our sins into the deepest part of the sea. We are also told that God is slow to anger. He is not like us.

But You, Lord, are a compassionate and gracious God,
slow to anger and rich in faithful love and truth. Psalm 86:15 (NASB)

We quickly get angry. It explodes inside and then out of our mouth. God is not like us.

This you know, my beloved brethren. But everyone must be quick to hear, slow to speak and slow to anger; for the anger of man does not achieve the righteousness of God.  James 1:19    (NASB)

Isaiah 6:1-3 reveals what the angels of heaven know about God.

Our God is holy and does not sin. That is the character of God. That is His nature and He does not change (Malachi 3:6; Hebrews 13:8).

God Is Vengeful Against Sin and The Wicked

Nahum 1:2-3 tells us that God can be vengeful but notice what the passage says,

A jealous and avenging God is the LORD;
The LORD is avenging and wrathful.
The LORD takes vengeance on His adversaries,
And He reserves wrath for His enemies.
The LORD is slow to anger and great in power,
And the LORD will by no means leave the guilty unpunished.
In whirlwind and storm is His way,
And clouds are the dust beneath His feet. Nahum 1:2-3 (NASB)

The prophet reveals God’s character. He is jealous, avenging, wrathful and angry but notice why. That is His response against adversaries and enemies. In His holiness He defends His own. In the following passage God delivers and rescues us from enemies, those who rise up against us and from the violent man.

The God who executes vengeance for me,
And subdues peoples under me.
He delivers me from my enemies;
Surely You lift me above those who rise up against me;
You rescue me from the violent man.  Psalm 18:47-48 (NASB)

To proclaim the favorable year of the LORD
And the day of vengeance of our God;
To comfort all who mourn,
To grant those who mourn in Zion,
Giving them a garland instead of ashes,
The oil of gladness instead of mourning,
The mantle of praise instead of a spirit of fainting.
So they will be called oaks of righteousness,
The planting of the LORD, that He may be glorified. Isaiah 61:2-3 (NASB)

Additionally, God does not want us seeking vengeance since we sin when we seek vengeance. We sin even when we seek our own justice because we are not all-knowing and truly just. But our God is all-knowing, just and righteous all together, and His decisions are perfectly just and holy.

Never take your own revenge, beloved, but leave room for the wrath of God, for it is written, “VENGEANCE IS MINE, I WILL REPAY,” says the Lord. BUT IF YOUR ENEMY IS HUNGRY, FEED HIM, AND IF HE IS THIRSTY, GIVE HIM A DRINK; FOR IN SO DOING YOU WILL HEAP BURNING COALS ON HIS HEAD.” Do not be overcome by evil, but overcome evil with good. Romans 12:19-21 (NASB)

God is a righteous judge
and a God who shows His wrath every day.  Psalm 7:11 (NASB)

God Is Jealous Against Non-Existent gods

We are also told that God can jealous.

But why is He jealous? The Q&A “Why can God be jealous but we cannot?” answers that question. In summary, His jealousy is not a self-centered jealous. The Hebrew word that is translated as jealous, when we are told that God is jealous, refers to a strong passion. That is, God is strongly passionate that we not worship any other gods. Why? Because all of the other gods are non-gods (Isaiah 43:10; 44:6; 45:5. They are demons (1 Corinthians 10:20). God is indignant against sin and the demonic realm’s desire to lead us into error and away from a life of blessing.

Scripture also reveals that God will eventually cause everyone to die. When Adam sinned humanity left God. God did not leave us. The penalty of sin was death (Genesis 2:17; Romans 6:23). When Adam sinned everyone that would be born would be like Adam. That is, we would be sinners (Romans 3:23) and physically die (Romans 6:23). God as our creator has the right to establish the length of our days and our holy God decreed that if Adam sinned the human race would eventually physically die.

Then the LORD saw that the wickedness of man was great on the earth, and that  every intent of the thoughts of his heart was only evil continually. The LORD was sorry that He had made man on the earth, and He was  grieved  in His heart. The LORD said, “I will blot out man whom I have created from the face of the land, from man to animals to creeping things and to birds of the  sky; for  I am sorry that I have made them.”  Genesis 6:5 (NASB)

John 5:16 says that there is a sin that will cause us to die. Therefore, we can either die according to the days given us (Psalm 90:12) or we can commit some sin and die early.

If you doubt God, remember the following verses,

Then the LORD answered Job out of the whirlwind and said,
“Who is this that darkens counsel
By words without knowledge? Job 38:2 (NASB)

Then the LORD said to Job,
“Will the faultfinder contend with the Almighty?
Let him who reproves God answer it.” Job 40:2 (NASB)

Then Job answered the LORD and said,
“I know that You can do all things,
And that no purpose of Yours can be thwarted.
‘Who is this that hides counsel without knowledge?’
Therefore I have declared that which I did not understand,
Things too wonderful for me, which I did not know.”
‘Hear, now, and I will speak;
I will ask You, and You instruct me.’
I have heard of You by the hearing of the ear;
But now my eye sees You;
Therefore I retract,
And I repent in dust and ashes.” Job 42:1-6 (NASB)

On the contrary, who are you, O man, who answers back to God?  The thing molded will not say to the molder, “Why did you make me like this,” will it? Or does not the potter have a right over the clay, to make from the same lump one vessel for honorable use and another  for common use? Romans 9:20 (NASB)