Do people who commit suicide go to hell since they cannot repent?

Do people who commit suicide go to hell since they cannot repent? 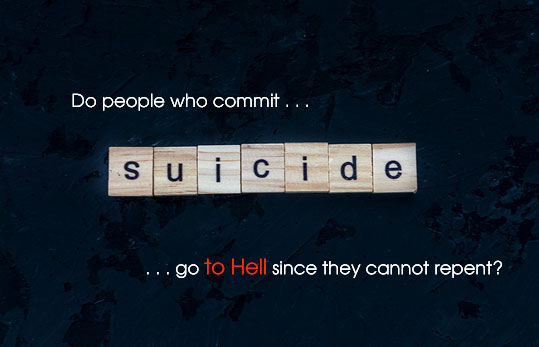 Suicide In The Bible

In none of these historical suicides does the Bible reveal the eternal destiny of these individuals, except for Judas who is described as the son of perdition (John 17:12). That is, he went to hell. But he went to hell because he did not believe in Christ and betrayed Him.

Suicide Is Prohibited In Scripture

It is either intentional deception or due to a lack of biblical knowledge and understanding to claim that Scripture never prohibits suicide, since Exodus 20:13 prohibits murder.

It should be noted that the Hebrew word that is typically translated as “kill” in Exodus 20:13 more accurately refers to murder or intentionally causing someone to die. Since suicide is an intentional act, it is murder. The command to not murder is repeated in Deuteronomy 5:17; Matthew 5:21; Romans 13:9 and James 2:11. All murder is sin (2 Samuel 12:9-10), including self-murder. That is the clear teaching of Scripture.

Destiny of Those Committing Suicide

For God so loved the world, that He gave His only begotten Son, that whoever believes in Him shall not perish, but have eternal life.
John 3:16 (NASB)

Then John 3:18 reveals that those who do not believe in Christ have already been judged and are already destined for hell.

He who believes in Him is not judged; he who does not believe has been judged already, because he has not believed in the name of the only begotten Son of God. John 3:18 (NASB)

The message is that those who refuse to believe in Christ are already judged and will perish. They do not have eternal life. This means that unbelievers who commit suicide will go to hell because that was already their destiny.

Those who are believers or Christians, who choose to commit suicide, will still go to heaven, not because they did not sin by committing suicide, but because Christ made two promises in John 3:16 that those who believe in Him will not perish and will have eternal life (see above). In John 6:39-40 Jesus adds to His promise in John 3:16 when He says that everyone who believes in Him will be raised up on the last day and have eternal life.

Jesus states this promise two times in this passage and then repeats the promise with even more dogmatic words in John 6:44, 54. In John 6:47 Jesus gives the promise again that those who believe in Him have eternal life.

Later in John 10:27-29 Jesus repeats the promise again that believers will never perish.

Christ even adds that no one can snatch a believer out of His hand and no one can snatch a believer out of the Father’s hand. Some have claimed that a Christian can jump out of Christ’s hand and also out of the Father’s hand. But such a conclusion is wrong since Christ says “no one” can snatch or remove a Christian, which includes the individual believer. That is, Christ’s promises are true promises and the true Christian will end up in heaven, no matter what he or she does. That is, a believer’s spiritual destiny does not depend upon his or her works or sins. If heaven depends upon our works or upon our behavior, then salvation is not by faith but by works. Ephesians 2:8-9 says that salvation is not based on works. A Christian’s destiny depends upon Christ’s promise. All the past, present and future sins of a Christian are forgiven at the moment of saving faith.

Scripture teaches that true Christians will never be condemned (Romans 8:1).

Therefore there is now no condemnation for those who are in Christ Jesus. Romans 8:1 (NASB)

The Greek word for condemnation is katakrima, which means “to judge someone guilty.” That is, Christians will never be judged guilty again. Why? Romans 5:1 says Christians have been justified, which means that Christians have been judicially declared to be righteous, That is, God has acted like a judge and declared us to be holy or to be righteous because He has forgiven our sins.  2 Corinthians 5:21 is even more forceful when we are told that Christians are considered to be as righteous as God.

He made Him who  knew no sin to be  sin on our behalf, so that we might become the righteousness of God in Him. 2 Corinthians 5:21 (NASB)

That is, once a person is a Christian, Christ has promised him or her that they are going to heaven.  Christ repeatedly promised we will go heaven. Heaven is secure!

Therefore, if a person is truly a Christian and in a moment of sinful weakness commits suicide, he or she will still go to heaven, even though the individual cannot repent of that sin. The individual will go to heaven because God judicially declared them to be righteous at the point of their salvation, even though they still sin. No sin will prevent a Christian from going to heaven. If a single sin can prevent a Christian from going to heaven, then God lied. He made a promise that He will not keep. The Scripture tells us that God is not a man that He should lie.

Suicide is a tragic sin, but it is not a sin that is more grievous than any other sin. Those who disagree should search the Bible and try to find a verse that says suicide is the worst sin. They will not find any verse that states that because none exist. Ausgustine of Hippo said these words,

It is significant that in Holy Scripture no passage can be found enjoining or permitting suicide either in order to hasten our entry into immortality or to void or avoid temporal evils. – Augustine of Hippo