Did Jesus descend into hell?

I recently received a newsletter with the following insert: “When God walked in human flesh, covered with the dust of the road and the tears of the people, He was saying with every step, 'Look at me, this is what God is like.' God is not remote, He is here. God is not cruel, He is kind. God is weak, He is strong. God is not indifferent to your pain; He weeps. God does not keep a record of wrongs; He has a river of forgiveness. God does not hate you. He loves. Look at me. Do you see the cross, the rust, tearing nails, the roar of anguish as darkness wraps me in all the foul evil stench of who you are so that you can be where I am? This is the price I paid, willingly for you. Do you see the price tag? Do you understand the value? Do not tell me you are not worth loving - I descended into hell because you are. ” My question is did Jesus descend into hell?

There are may who are fascinated with the idea that Christ descended into hell after His fleshly body died on the cross. 1 Peter 3:18-20 is the passage that seems to teach this concept. It states that Christ visited spirits in prison. When He visited them Christ made proclamation or announced victory over them.

For Christ also died for sins once for all, the just for the unjust, so that He might bring us to God, having been put to death in the flesh, but made alive in the spirit; in which also He went and made proclamation to the spirits now in prison, who once were disobedient, when the patience of God kept waiting in the days of Noah, during the construction of the ark, in which a few, that is, eight persons, were brought safely through the water.  1 Peter 3:18-20 (NASB) 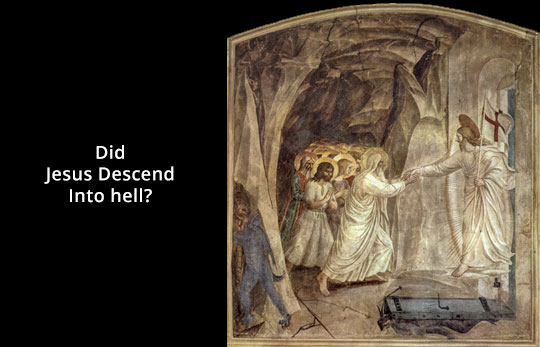 Did Jesus Descend Into Hell?

Jesus did descend into the abyss to proclaim victory over the demons who were confined there. The spirits that 1 Peter 3:18-20 refers to were evil angels or the “sons of God” in Genesis 6:1-2 who cohabitated with women.

Now it came about, when men began to multiply on the face of the land, and daughters were born to them, that the sons of God saw that the daughters of men were beautiful; and they took wives for themselves, whomever they chose. Genesis 6:1-2 (NASB)

Genesis tells us that a group of angels violated the boundaries that God had established for fallen angels, evil angels, spirits, evil spirits or demons. These demons have been confined to this abyss since they disobeyed. In Luke 8:31 a group of demons called “Legion” asked Jesus to not send them to that abyss. This is not hell, Sheol, Hades, or the Lake of Fire. The abyss is a compartment with Hades. But scripture does not tell us that Jesus entered hell. That is an overstatement and scripture does not support such a conclusion.

Was The Abyss A Compartment In Hell?

What is hell? There is a study at this site which discusses the difference between hell, hades, the Lake of Fire, the abyss, and others. If you are interested, the study is entitled, “Heaven, Paradise, Sheol, Hell, Hades and Lake of Fire.”

There are several other question and answers that discuss this subject further. Links to these studies are provided in the “Suggested Links.” The study The Victory of Christ Over Everything provides more details about the meaning of 1 Peter 3:18-20. For a Bible study that explains why the spirits or angels in 1 Peter 3:18-20 are the Son of God in Genesis 6:1-4 listen to the message “False Teachers Are Cursed, part 1.”

The Victory Of Christ Over Everything
Was Jesus dragged into hell by Satan and tortured?
Where in the Bible are we told that Jesus descended into hell?
Where in the Bible does it speak of Jesus going to hell/hades after His death?
Did Jesus’ body and spirit die?
Heaven, Paradise, Sheol, Hell, Hades and Lake of Fire
Who were the sons of God and daughters of men in Genesis 6:2-4?