A set of ancient manuscripts commonly referred to as the Papyri Graecae Magicae was purchased in Egypt in A.D. 1827. The authors are unknown. This collection of papyri dates from the second century B.C. to the fifth century A.D.  The papyri are excerpts and fragments documenting magical spells, mystical knowledge and occult secrets. 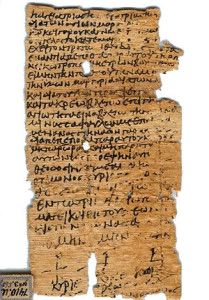 Several magical papyri which have survived from [the days of the apostle Paul] to ours contain attempts to reproduce the true pronunciation of the ineffable name – Iao, Iabe, and so forth –  as well as other Jewish expressions and names such as Sabboath and Abraham, used as elements of magic spells. The closest parallel to the Ephesian exorcists’ misuse of the name of Jesus appears in a magical papyrus belonging to the Bibliotheque Nationale in Paris, which contains the adjuration: “I adjure you by Jesus, the God of the Hebrews.” – F. F. Bruce, The Book of the Acts, Eerdmans Publishing Company. 198 8 , p. 368.